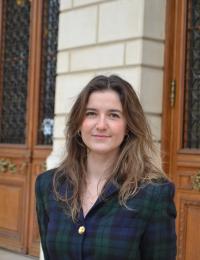 Lucie Plasse newly joined the MSD Unit as an intern for the Migration and Sustainable Development Unit to support the Making Migration Work for Sustainable Development (M4SD) programme, an 11-country programme supporting migration and development initiatives with a focus on the local level. She provides support in a broad range of areas, such as the local portfolio, knowledge management, analysis and the re-launch of the M4D Net website.

She previously did a six-month internship at the Justice and Corrections Service part of the Office of Rule of Law and Security Institutions within the United Nations Department of Peace Operations. She completed a third master's degree at the University Paris 1 Panthéon-Sorbonne in Law and Governance of International and European Affairs. Last year, Lucie spent a year at the Collège Juridique Franco-Roumain d’Etudes Européennes of Bucharest, Romania, specializing in International Governance.  She completed a first master's degree in International Law at the Université Lyon 3 Jean Moulin, where she was also a member of the LyonMUN team with a focus on United Nations, and a second Master’s in International Relations at the University of La Paz, in Bolivia.  She speaks French, English and Spanish.